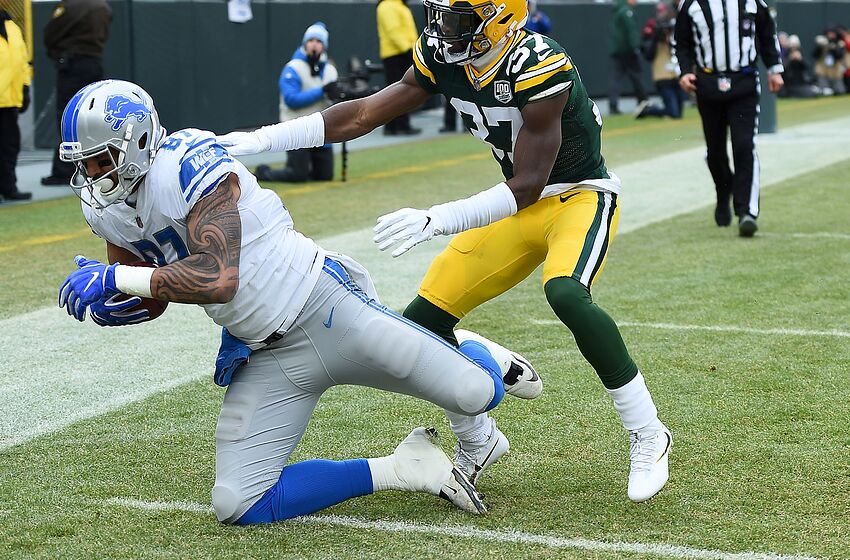 GREEN BAY, WISCONSIN - DECEMBER 30: Levine Toilolo #87 of the Detroit Lions catches a touchdown in front of Josh Jackson #37 of the Green Bay Packers during the first half of a game at Lambeau Field on December 30, 2018 in Green Bay, Wisconsin. (Photo by Stacy Revere/Getty Images)

On the Green Bay Packers’ bye week, if we take a look ahead to the 2020 offseason and some decisions they’ll have to make, I don’t anticipate these four players being on the roster next season.

Life is good in Green Bay, Wisconsin and for Green Bay Packers’ fans everywhere. It’s the bye week and the Packers are second in the NFC playoff race with an 8-2 record while also being a crucial 3-0 in the NFC North.

We’ve seen a lot of great performances this season, from the defense shutting down Chicago in week one, to Davante Adams’ huge game against Philadelphia. Along with Aron Jones running all over Dallas, and vintage Aaron Rodgers ripping apart the Oakland secondary. We’ve also had some surprises such as the emergence of Allen Lazard and the domination by rookie Elgton Jenkins.

However, on the flip side we have seen players underachieve, which is just a part of the NFL. And while it isn’t just strictly their performances this season that could end their tenures in Green Bay, but a number of other factors as well, these are four high-profile players that I don’t expect to be back in 2020.

This may be the most obvious decision of the players we will go through but with the emergence of Elgton Jenkins this season, Lane Taylor will likely find himself with a new team in 2020. The 2018 season was a rough one for Taylor as he battled injuries and wasn’t the same player that we had seen in previous years. As a result, the Green Bay Packers drafted Jenkins who quickly put pressure on Taylor for the starting job at left guard and was named the starter by week three, while Taylor was moved to IR.

Taylor has one year left on his contract in Green Bay and it comes with a $5.925 million cap hit, which is quite a bit to be paying a backup guard. However, a lot of teams need offensive linemen, so a trade this offseason for some draft capital could be the likely outcome and the Packers would take a dead cap hit of just $1.375 million.

There were many Packer fans out there who wanted Green Bay to cut ties with Jimmy Graham this last offseason after he wasn’t the red zone threat in 2018 that everyone had hoped he’d be. But credit needs to be given where it is due and after disappearing in the Minnesota and Denver games, Graham has been much better. In the last seven games, he’s caught 24 of 33 passes at nearly 12 yards per catch with two touchdowns. Not to mention that his blocking has improved.

With that said, with Jace Sternberger and Robert Tonyan on the roster, I expect in 2020 that those two take on larger roles and the Green Bay Packers bring in another veteran tight end but at a much cheaper cost. Meaning Graham won’t be back. On his current deal he comes with a cap hit of $11.67 million if he’s on the team in 2020, however, unlike last offseason cutting him comes with a much cheaper dead cap hit of only $3.67 million. Moving on just makes the most sense.

This is the most difficult decision for me out of the group, but with what Blake Martinez could fetch on the open market as a free agent, my gut says the Green Bay Packers let him walk. Martinez is a polarizing figure among Packer fans and while he rarely misses a snap and is seemingly around every tackle, he has his limitations as well.

In an article by Ryan Wood of Packers News, an anonymous NFL agent estimated that Martinez would fall in the $8-$10 million range on the open market. As I mentioned, I think that number will be too rich for Green Bay at the inside linebacker position, however the issue with moving on is that they don’t have a viable replacement on the current roster.

After a rough rookie season where he led the team in penalties, and then an unfortunate injury early in training camp further set back Josh Jackson’s progress, now 10 weeks into the season he can’t even see the field. As is stands, of Green Bay’s cornerbacks, Jackson has played the fifth most snaps and has actually been a healthy scratch on game day the last two weeks. In his limited play this season, Jackson has given up five catches on six targets for 65 yards with a touchdown.

Next: 3 Packers who need the bye the most

At Iowa, Jackson played primarily zone coverage and the transition to mostly man in Mike Pettine’s system has been a struggle. My guess is that Jackson will be in camp next summer in what will be his final attempt to show that he is improving, but if he isn’t, the Packers will try to trade him or just flat-out cut him.

All contract info via Spotrac