Green Bay Packers and George Iloka could be a nice match by Brian Sampson
Green Bay Packers: Who is on the cut line? by Brandon Carwile
Next2 of 3Prev
Use your ← → (arrows) to browse 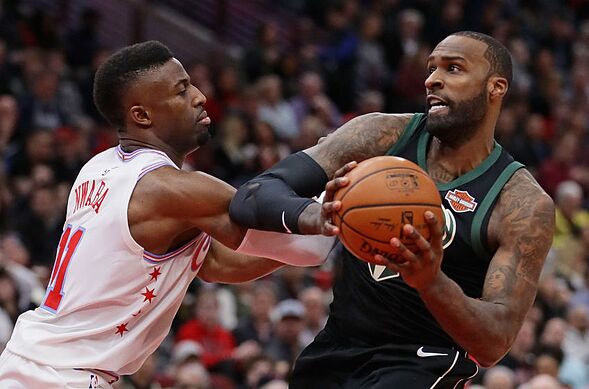 CHICAGO, IL – MARCH 23: Shabazz Muhammad #15 of the Milwaukee Bucks drives against David Nwaba #11 of the Chicago Bulls at the United Center on March 23, 2018 in Chicago, Illinois. NOTE TO USER: User expressly acknowledges and agrees that, by downloading and or using this photograph, User is consenting to the terms and conditions of the Getty Images License Agreement. (Photo by Jonathan Daniel/Getty Images)

Muhammad made his way to Milwaukee via the waiver wire in March of last season. It was an interesting depth addition that actually turned out pretty well in the time he spent on the court.

Last season, he played primarily as a combo wing who was called upon to give the Bucks’ bench an added scoring boost. It’s safe to say that he did that rather efficiently with a 62.4 percent true shooting percentage albeit in a minimum role. With this year’s team featuring a stable of shooting guards and small forwards it will be tough for Muhammad to crack a lot of minutes there, but his positional flexibility could help him out.

Muhammad is a tweener at 6-foot-6 between a shooting guard and a small forward, but with the small ball trend the NBA is at right now, he could see some time at power forward.

In terms of his weight, we have seen a decrease in his athleticism over the past few seasons due to his weight gain. It’s important that Muhammad returns to his peak physical condition to regain that explosive athleticism that once put him atop the ESPN 100 rankings as a senior in high school.

It does make sense that Milwaukee brought Muhammad back on a training camp contract after they opted to let Jabari Parker walk this offseason. Muhammad has a similar “bucket-getter” persona to that of Parker and the hope is for him to become a spot scorer in limited minutes. If that happens it gives the Bucks that scoring punch that is necessary over an 82-game season for a fraction of the cost that Parker would have been. He will have to perform well during training camp to be able to make this roster, but if talent is what the Bucks desire than Muhammad might be their man.

Next: Christian Wood
Next2 of 3Prev
Use your ← → (arrows) to browse
Load Comments
Event Tickets
Powered by StubHub
Top Stories